How Beebeejump is making people energy independent in Nigeria

The Cambridge dictionary defines independence as the ability to live your life without being helped or influenced by others. In Nigeria, the grid model of energy generation and distribution by the government does not portray independence. It then goes without a debate that to be power-independent one needs to control the generation and distribution of power. Solar systems avail you the independence of not experiencing epileptic power. Solar companies offer complete solar systems that include a solar panel for trapping the sunlight, a solar battery that stores the power, power inverter that converts the DC power to AC for contemporary appliances like TV, Laptops, and the likes. Beebeejump solar is a leading solar power company in Nigeria. With the vision of lightening up Nigeria households, it provides solar systems that comprise of a solar panel, lithium iron battery, power inverter with an adapter that allows charging of the battery with Nepa and solar source. As a market leader in the solar industry, beebeejump solar has offered her quality product to Nigerian citizens both in Urban areas like Lagos and rural areas. 100% of beebeejump customers got our product because of the unreliable power supply in the country and the quality her product offers. 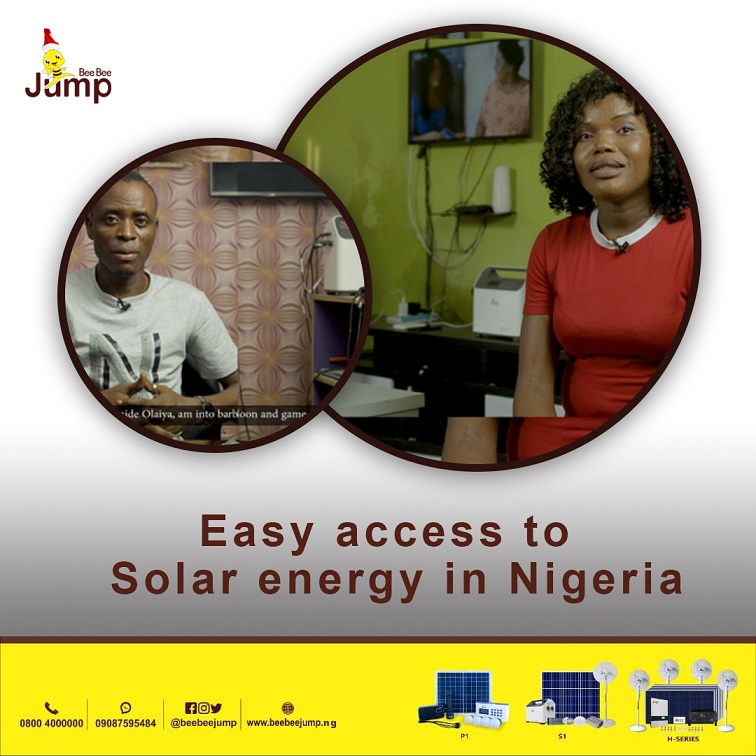 Mrs. Omotola, a mother of three that stays in Ikorodu. She said sometimes there will not be electricity for one week straight in her area. With the epileptic power supply in Ikorodu, she had a difficult time going about the duties of a mother and a wife. Her baby can not sleep when the room is hot. So one day she walked into one of beebeejump office in Lagos state to get the Beebeejump solar S1 product. “This has made the duties of a mother for me easy because my son can now sleep very well and I can wake up anytime to do house works”. So she said. The S1 product also helped her relax because she can watch her TV anytime she wants with the assurance of an uninterrupted power supply. People also come around her house to charge their phones, in her words they feel like a king in their environment.

Mr. Olamide Olaiya in Ogun state. He uses the S1 to power his Barbing salon, Boutique, Electronics, and Games center business. He uses the inverter to power his clippers, Tv, Decoder, and also sound system. He also uses the S1 bulbs to lighten up his boutique especially at night. In his words

“the light situation of this area is bad and that is how it is all over the nation. The light here is not stable, if we put on the light at times our transformer might go bad. It has been 3 days now that our transformer has been carried away, so that is why I looked for an alternative in order not to disrupt business, and also the price and scarcity of petrol at times is a huge challenge, so I looked for an alternative. Beebeejump solar is what saved me from electricity issues because business was almost going down because of an epileptic power supply. What beebeejump system is doing for me here is numerous”. He uses the system for his major business which is a barbing salon, so in the course of barbing for a customer and NEPA/PHCN does what they know how to do best, he doesn’t stress himself, he just switches to S1 and continues his business. He also powers his TV and Fans with the solar product for the comfort of his customers.

Mr. Olamide and Mrs. Omotola are now independently generating their own power. Which is the true definition of being power-independent. The importance of solar power for homes and business cannot be overemphasized. But it is being emphasized by beebeejump solar which is making solar systems affordable and accessible for people. Need to get a solar system toady click here