Solar power and some solar lies.

Change is constant but apparently does not come without resistance. There are so many objections about solar, a good clarity on them will make embracing solar power more appealing in the largest market of solar power in Africa. Here are some of such lies; 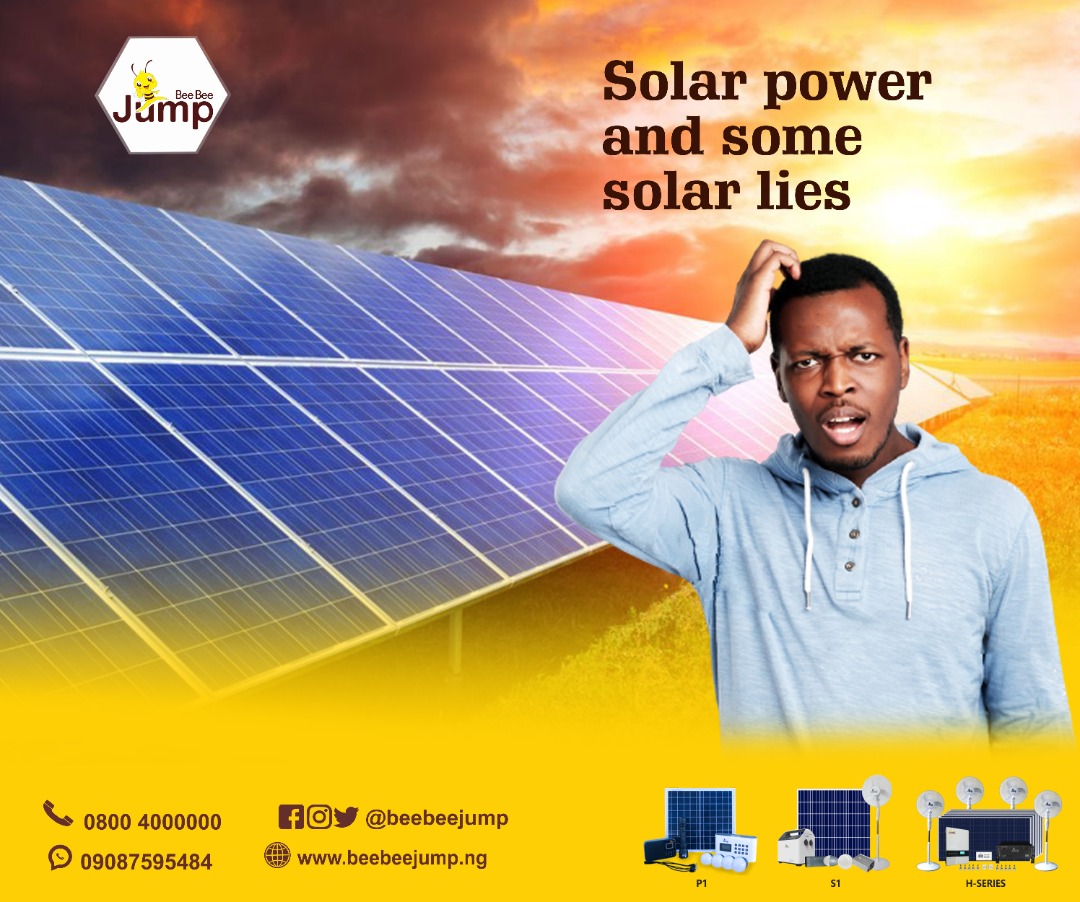 - It’s expensive I cannot afford it.

Most people objection to solar is it’s high level cost. Most people think the up front cost of a solar system is not justifiable. But it is, a comparative analysis of using a generator will convince you. Getting a generator of thirty thousand naira with an unlimited running and servicing cost coupled with it unending air, water and noise pollution compared to getting a solar system of thirty five thousand naira with no running and servicing fee with a sure durability of more than ten years and no form of pollution, which would you prefer?. So it is a wrong idea that people have, a solar system is cheaper especially presently with it mass production. According to businessfinder.com the cost of producing solar power is rapidly declining. It now costs $50 to produce one megawatt-hour of solar power.

- Solar doesn’t work its a scam!

Most people with this objection have a bad experience using fake solar systems or rumour from people. But the fact still remains that companies are run by humans and are prone to error. Not to justify what is wrong though, a good customer service in which most solar companies have presently as and will eliminate the objection. Solar does work, solar power contributed 2.7% to electricity generation in the US in 2019 alone and it is getting the awareness it deserves in Africa countries like Morocco, Kenya and Nigeria, the largest market for solar power in Africa.

- I will have a leaking roof

For a solar system to function it needs to be able to trap photons from the sun, this can be done even when there is no visible light. For the photon to be trapped a solar panel has to be installed, preferably on the roof to allow enough trapping of the photons. The idea that some people get that their roof will leak is only obtainable when the installation is being done by Non- professional. Solar companies like beebeejump solar do not allow Non-professional do solar product installation just to make sure that everything goes fine. If solar installation is done right your roof will not be affected and you stand a chance of been independent when it comes to power generation.

The formal battery technology used in the production of solar system way back needs the attention of users to maintain it in order to last long and function properly. In recent times the solar system is being built in such a way that allows little to no maintenance as a matter of fact they have become smart.The lithium iron battery technology does not require maintenance. The beebeejump solar H series contain a smart technology called MPPT which automatically switch the system from sun source to grid power supply without your intervention. Indicators of when the battery is fully charged or when it’s being over loaded also exist, allowing very minimal intervention. Hence, the objection of maintenance is out of it, solar systems are now smart and does not require much input from you.

- It will disfigure my roof

Some people are very particular about how their roof or surroundings look. The solar industry has become conscious of this objection by people and have designed solar panels in such a way that it looks good no matter the structure of your roof. Some Solar companies even show you how it will look on your roof or surrounding  before it is being installed.

- Solar systems are not movable

Beebeejump solar is a renowned solar company in Nigeria that gives you solar systems with flexible payment plan, free maintenance and at least three years warranty on it solar systems.